Build in the Future

Our business is to design and deploy cost-effective and collaborative constructions methods that give you peace of mind.

Vision
It is possible to build better quality in a serene, fast, economic and safe manner.

Diversity
Lean experts, construction professionals and young engineers are united by their passion for innovation. They share a common vision: the shift of the construction world to the lean approach.

Team work
The entire team constantly contributes to R&D while at the same time relying on it.

The passion for innovation
Lean Construction cannot be defined once and for all. Its wealth is linked to its perpetual adaptation and its added value is not stagnant. It can be continually improved. This conviction is our team’s passion.

The Imma community shares the values of respect, humility, transparency and trust.

The members of the team are united by:

Fabien Font created IMMA in 2007.
At a time when the construction sector was busy managing growth, he took a fresh look at Construction and Public Works. His international background in some of the largest French companies, his observation of foreign industries, his leadership, his researcher’s mindset and his taste for innovation, quickly enabled him to foresee concrete answers to the problems encountered. His desire to imagine possible future developments would lead him and his team to reinvent construction management.

He met Serge Goepp, then Deputy Director of Engineering at Vinci Construction France, during his first steps in the adaptation of lean management for large construction groups. His observation strengthened his conviction that through lean tools, the world of Construction and Public Works could turn over a new leaf by shifting towards industrialization. So he assembled a team of specialists and clarified the first adaptations of lean management

Next he met with Nicolas Baudard, who at the time was Project Field Director of Engineering Works at Dodin Campenon Bernard.

Ten years later, recognition by professionals in the construction sector and their enthusiasm for the excellence-creating tool that is lean construction, lead to the achievement of over 400 projects in France and abroad. Enthusiastic about lean construction and wishing to join a team that had proven its worth, Nicolas Baudard and Serge Goepp, who has since been certified as a Black Belt in lean management, decided to join them. The first is now the Director of IMMA France while the second heads IMMA Switzerland.

While IMMA, the French leader in consultancy and training in lean construction, continues its internationalisation, the ambition of Fabien Font and his teams remains unchanged—to make lean construction an increasingly robust tool for building in the future.

Decisive stages in the life of IMMA 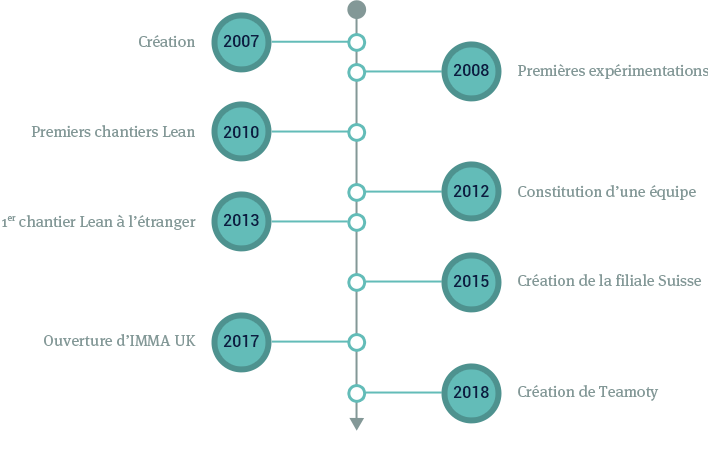 2015creation of the Swiss subsidiary